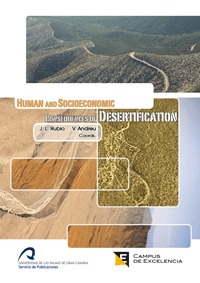 Human and Socioeconomic consequences of desertification

As a result of human activities and climate change the processes of desertification are progressing. Around 40% of the earth surface is threatened by risk of desertificacion, including wide areas of Mediterranean Europe and the Canary archipielago. Desertification, at the latest consequentes represents the dismantling of all biospheric potential of the affected zone and its conversion into a barren and unproductive territory. The effects of soil degradation not only menace the land agricultural potential of providing food and biomass but also its implies the alteration of the hydrological cycle, drastic decrease in biodiversity, development of feedback mechanismsaffecting important climatic parameters, and in addition, the increase of the catastrophic consequences of hazards such as forest fires, landslides and floods. All these processes give rise to important human and socioeconomic implications. Spain is the most arid country in the European continent and also the most affected by the dessertification risk.However, the social perception of this problem is limited and, generally, its intrincate mechanisms and processes are not visualized as something worrying at the level of perceptionof, for example, the tendency to global warming. Contributing to a greater information and scientific and social implication in the fight against desertification, in this book are analyzed processes and factors, biophysical and socioeconomic consequences, scientific and technological responses, and proposals of integrative, participatory and implicated initiatives to avoid an reverse the tendency od desertification menace.The book collects the papers presented during the Sectoral Workshop on Socioeconomic consequences and human aspects of desertification process (Campus de Excelencia, Fuerteventura, 11th July of 2007) and also those presented in the Conference on Desertification and Environmental Security: Consequences and Prevention (Cosmo Caixa, Fundación "La Caixa" Madrid, 9-11th March of 2006), likewise it includes the Manifiesto on Desertification, Poverty and Migrations, prepared in the Capus de Excelencia 2007.