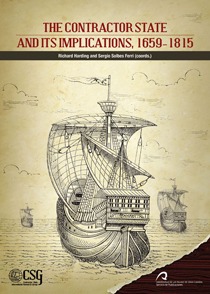 This book aims to bring public spending to the debate on the construction of modern States. Funding to support the army and Navy was the main desire of the pre-industrial mercantilist State. Only the contractor State is strong enough to meet the demand for military men, equipment, weapons and food; which leads to a great opportunity for economic sectors that were mobilized to meet the public demand and achieve their own goals.

0. Introduction
1. Supplying the belligerent countries. Transnational trading networks during the Napoleonic Wars
2. Trading with the enemy. British private trade and the supply of arms to India, c. 1750-1820
3. Global power, local connections: The Dutch admiralties and their supply networks
4. Provisioning the Combined Army in Germany, 1758-1762: Who Benefited?
5. Victualling Louis XV's armies. The Munitionnaire des Vivres de Flandres et d'Allemagne and the military supply system
6. Who spends the Spanish Inquisition's Money?
7. Buying cannons outside: when, why, how many? The supplying of foreign iron cannons for the Spanish Navy in the eighteen century
8. Contractors, Warships of the Royal Navy and Sea Poweer, 1739-1748
9. War, Government and the Market: The Direction of the Debate on the British Contractor State, c. 1740-1815
10. Contracts and the Role of the State. Portuguese military provisions supply system in the early nineteenth century
11. A Global Perspective for the Comprehension of Fiscal State Formation across Eurasia from the Rise of Venice to the Opium War
12. The Royal African Company's Contractors
13. Buying supplies from your enemy or how the French navy stocked up with products from the North in the eighteenth century
14. Contracting and Accounting: Spanish Army Expediture in Wardrobe and the General Treasury Accounts in Eighteen Century
15. The transformation of Tokugawa Military Regime in the First Half of the Eighteenth Century in Japan: With Special Reference to Yoshimune's Reformation
16. Contractor State and Mercantilism. The Spanish-Navy Hemp, Rigging and Sailcloth Supply Policy in the Second Half of the Eighteenth Century